You are here: Home / Archives for Mirchi Bajji 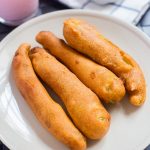 Milagai Bajji Recipe - Who can say NO to this Milagai Bajji that too Chennai People. Most of the Chennai People when they go to Marina Beach never fail to taste this milagai bajji, sundal, appalam and for non veg lovers this fried small fish. In my childhood days I used to eat this like crazy. But you know, it will be little spicy, so I eat one kadi bajji and one sip of water … END_OF_DOCUMENT_TOKEN_TO_BE_REPLACED