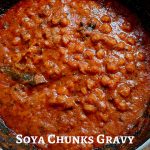 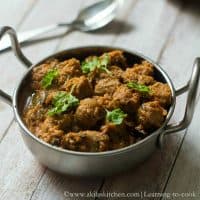 Soya chunks fry | meal maker fry is one of the easiest and tasty fry I can say. When I was working in India my office colleague brought this soya chunks fry and I loved the taste immediately. From that time on wards it has become one of my favorite evening snack and a easy to do snack when I am not in a mood to cook any side dish for rice. You can find some soya chunks … END_OF_DOCUMENT_TOKEN_TO_BE_REPLACED 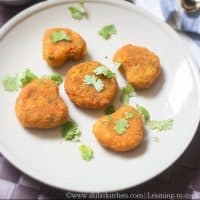 Soya chunks cutlet or meal maker cutlet recipe with step wise pictures for your easy understanding. This cutlet is very healthy and protein rich as it is made up of soya chunks and all veggies are mixed with it. I always love the cutlet. That too the protein rich Soya chunks cutlet or the Meal maker Cutlet. Kids will definitely love this kind of cutlet, with different … END_OF_DOCUMENT_TOKEN_TO_BE_REPLACED

Soya balls gravy or the meal maker gravy is a tempting and delicious side dish for the roti or chappathi. Soya balls or meal maker is rich in protein and good for health too. Those who do not eat non veg, go for this soya balls. Will update with step wise pictures soon.How to make Soya balls gravy/Meal maker gravyIngredientsSoya Balls - 2 cupsTomato - 2Onion - 2Ginger Garlic … END_OF_DOCUMENT_TOKEN_TO_BE_REPLACED